What Is an NFT Mystery Box and How to Open It?

Would you ever buy something without knowing what it is?

Many people do, which is why the NFT mystery box concept took off and many blockchain games and projects are releasing them. People are purchasing these boxes because of the surprise element, hoping to get lucky and win something special.

Learn all about it in the article!

What Is an NFT Mystery Box and How Does It Work?

An NFT mystery box is a box that contains a unique random NFT or several of them. It is also known as a blind box and it became popular in 2021. Many blockchain projects are releasing limited-edition NFT mystery boxes that contain NFTs of various rarity levels. It works the same as a physical mystery box – you don’t know what’s in it before you open it.

Now, you might wonder why would somebody buy something without knowing exactly what they’re getting?

Well, that element of surprise is part of the thrill – NFT boxes awaken that child-like excitement. Who doesn’t love some mystery?

It’s a lot like unwrapping a Christmas present when you were a kid – you’re so excited thinking about all the cool toys you might get.

However, as you might’ve experienced, a Christmas present doesn’t always meet your expectations. For example, instead of getting a PlayStation, you end up with a pair of Christmas socks, which is underwhelming to say the least.

The same goes with NFT mystery boxes. You might receive a super rare asset worth thousands of dollars. That, of course, is what everyone hopes for – getting a very rare and valuable NFT for a relatively small price of the box.

But you might also get a very common NFT that isn’t that special or worth that much. If the items you receive are worth less than what you paid for the mystery box, you lost money. It’s a gamble.

A similar concept to mysterious boxes is the gacha system in games. Players spend in-game currency to receive a random item like a game character, for example. That character can be a super rare one or a common one. Loot boxes work in a similar fashion. However, the items players get are consumable.

How to Make a Profit from an NFT Box?

All NFTs you get from a mystery box, regardless of their value and rarity, can be sold. That means you might make a profit from them if you manage to sell them for a high enough price, or you can use them in other ways.

Many people choose not to open the box and thus not discover what’s in it. Some decide to hold the unopened box for quite some time, hoping it will go up in value. If that’s the case and the box is unopened, they can sell the mystery box to another user, ideally for more than what they paid. This is another way to potentially make a profit from an NFT box.

What’s in an NFT Mystery Box?

Now, you’re probably wondering what you can find in an NFT mystery box?

Well, it can be anything from artwork to in-game items. While you never know exactly what you’ll get, some NFT mystery boxes give you a general idea of what type of NFTs you might receive. For example, if you’re purchasing a mystery box from a specific collection, you at least know you’re getting NFTs from that collection. Some even give you the odds of getting a super rare item, which is helpful.

Let’s take an NFT mystery box from the game Golden Bros, which costs around $140, as an example. When you look at its product description on Binance, it states that the box contains NFT costumes players need for participating in cryptobattles. That makes it clear that you’re getting a wearable in-game item and not a weapon, game avatar or something else. Furthermore, you can learn from the description that “the box includes 20 different costumes with 1 Exclusive Golden costume for Gregory.”

These NFTs come in different rarities, including rare, super rare, and super super rare items. The possibility of getting a super rare costume is 72.9%. This is another incentive to purchase this box.

You can see this type of information for most NFT mystery boxes to give you a general idea of what you might get as well as what your chances of receiving a super rare item are. 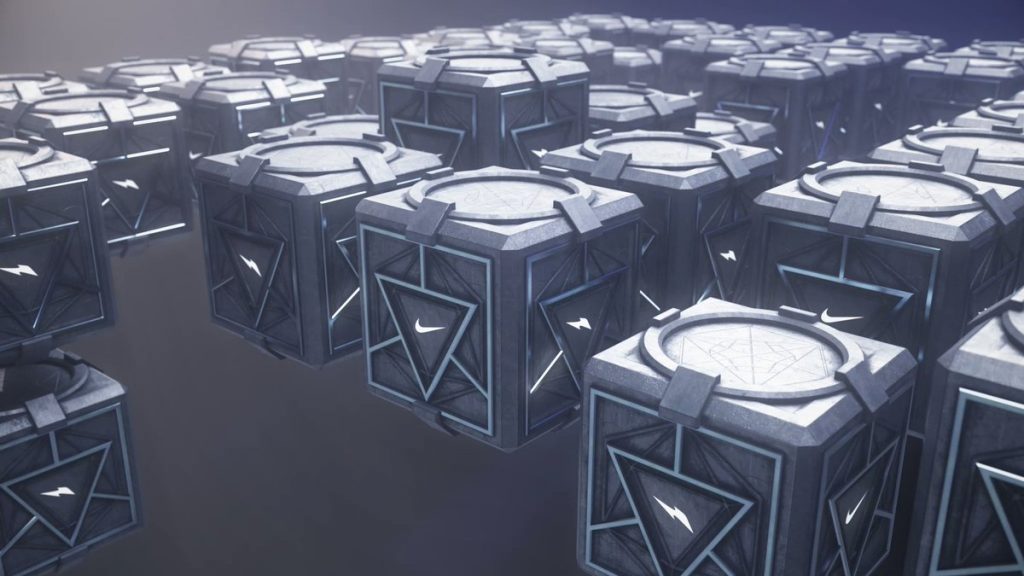 In collaboration with RTFKT, a virtual sneakers company, Nike has produced MNLTH, an NFT mystery box with a retail price of around $15,000. It immediately got the attention of sneakerheads and marked a new age of collecting sneakers.

The contents of the box include RTFKT x Nike Dunk Genesis Cryptokicks and a skin vial that changes the look of the sneakers. What was revealed was that people can not only collect but also breed and upgrade these sneaker skins to evolve their shoe.

The YouTuber Untied Hawaii purchased two Nike x RTFKT NFT mystery boxes for $13,000 and $15,000 respectively. After he bought them, their price doubled. If he had decided to sell them without opening them, he would’ve made a huge profit. However, the possibility of getting a super rare skin made him decide to open the boxes.

When he opened the first one, he got basic common skin, which lost him $6,000. He was a bit luckier with the second one. While he still didn’t get a super rare vial, it was slightly more valuable.

Another YouTuber, Ari Petrou also bought this box and ended up with a Human vial, which was equally disappointing.

This goes to show that purchasing and opening an NFT mystery box is a huge gamble and that getting super rare items is not easy.

Where to Find NFT Mystery Boxes?

For example, when you search for mystery boxes on OpenSea, you’ll find an array of different offers. For example, Dennis Rodman Mystery Boxes, Wasder Mystery Boxes, and Hype Selection: Mystery Sneaker Box. Some cost as little as 0,003 ETH, while others go up to 13 ETH and more. You can convert ETH to USD here.

Binance is another platform that has a great offer of NFT mystery boxes, including its own boxes, which are leading the sales. Furthermore, if you look at the product description when browsing NFT mystery boxes on Binance, you’ll get a clue of what might be inside, as well as what your chances of receiving a rare item are.

Should You Buy an NFT Mystery Box?

If you’re into the excitement that surrounds purchasing a mystery box and want to try your luck, I’d say go for it. You just might end up scoring big and getting a very valuable NFT. And even if you don’t get a super rare one, the NFT you get is still worth something, so you can trade it or use it in a game in some cases.

However, if you like to play it safe, NFT mystery boxes may not be for you. In that case, simply choose an NFT you like and purchase it from your preferred marketplace.

How to Buy an NFT Mystery Box?

Purchasing an NFT mystery box is the same as purchasing any other NFT. Simply head over to your preferred marketplace and search for mystery boxes. Granted, the main difference is that you don’t know exactly what you’re buying.

Some NFT mystery boxes are listed with a fixed price, while others are auctioned.

How to Open an NFT Mystery Box?

Once you click to open it, you’ll be able to see what you got. However, you won’t be able to sell that box, only the individual NFTs in it.

How to Sell an NFT Box?

Selling an NFT mystery box is incredibly easy. You simply need to list it on a marketplace and set a price, just like you would with any NFT.

NFT boxes can go up in value, especially if they’re scarce and from a popular collection, which means you might make a profit when reselling them.

While NFT mystery boxes are exciting and give people the opportunity to end up with a super rare NFT in their possession, they can also be disappointing if its contents are common.

It’s up to you to decide whether the thrill is worth it.

Hogwarts Mystery monetization – game that made $17 million in its first month. Sounds magical? Learn how to use this magic for your app.

Hogwarts Mystery monetization – game that made $17 million in its first month. Sounds magical? Learn how to use this magic for your app.