Over the years, gamers have grown accustomed to free-to-play games. As a result, previously popular pay-to-play games have been left behind.

But, in the last couple of years, another pay-to model grew in popularity – pay-to-earn games.

This happened due to the rise of blockchain technology and its expansion to the gaming industry.

Here’s everything you need to know about these trending games.

What Are Pay-to-Earn Games?

Pay-to-earn is a gaming business model that relies on blockchain technology. Simply put, these games allow people to earn cryptocurrency by playing games.

However, they come with a catch.

In order to start playing pay-to-earn games, players need to invest something first.

More precisely, they need to purchase an in-game asset upfront. Only once players do this will they be able to play the game and earn some money.

This is what sets “pay-to-earn” games apart from “play-to-earn” ones.

Many people are confused about these two terms, so let me explain their relationship.

The main trait of pay-to-earn games is that there is no playing nor earning without paying first. For this reason, these games are also known as pay-to-play-to-earn games.

Once players make the required investment, they can take further steps to make some money from the game.

What do players need to purchase in these games? What can they win? Keep reading to find out.

When someone mentions pay-to-earn, they probably talk about NFT-based games. To start playing these games, people need to invest in NFTs.

Okay, so what are NFTs?

This really doesn’t help out a lot, does it?

Let me put it this way…

NFTs are specific digital assets stored on the blockchain. They can come in different shapes and sizes. For instance, in the form of digital images, cards, or skins.

Here’s what I mean by that.

Unlike NFTs, money is fungible. If you give a ten-dollar bill to someone, and they give one to you, you’re tied.

However, the same rule doesn’t apply to NFTs. If you were to trade your NFT with someone, it’s very unlikely that you two would end up having an equally valuable NFT.

Players Own Their NFTs

By investing in an NFT, players gain full ownership of it. This asset is all theirs. It is linked to them in the same way as their ID or bank account.

No one has the power to take it away from them. The game developer doesn’t have this power.

This is because non-fungible tokens are tied to players, not games.

Once they own them, players can strategize what to do with them. They can trade them, sell them, or even gift them to someone else.

The crazy thing? This doesn’t have to be in-game.

NFT owners can bring their assets with them to any market that works on blockchain technology. In most cases, they aim to sell them. As long as there are people willing to buy them, players can trade their NFT items for cryptocurrency.

When players purchase an NFT, it comes with a certain value attached to it. For instance, if someone invests $20 in cryptocurrency, that is its current value.

Through gameplay, players strive to increase the value of their NFTs. Only by doing this will they be able to resell it for more.

To make this happen, they need to follow the game’s rules and upgrade their NFTs.

A good example of this process comes from the pioneer of blockchain games – CryptoKitties.

In order to join this game, players first needed to buy some Ethereum cryptocurrency. With it, they can purchase the game’s characters – virtual pets. These pets are NFTs, and players sell them to other players in virtual auctions. By playing the game, players can breed their pets with others and make them more valuable.

If you’re a developer planning to develop a pay-to-earn game, you need to pay special attention to game design.

When designing in-game assets, you need to be thinking about their value.

Here are some of the questions to ask yourself:

For starters, you need to decide how many one-type skins you will distribute among players. Will it be 10, 100, or 200 of each?

Next, you need to think about how players will upgrade their skins. For example, you can allow them to add a new feature to the skin for every ten levels they pass. Or you can make them blend skins with other players and create new skins with unique features.

It’s up to the players to estimate when it’s the best time to sell their NFTs.

They will decide on this move when they believe they’ve tweaked them enough. Besides that, players should also keep an eye on the NFT market trends.

The thing is, NFT values can vary day-to-day.

Axie Infinity is one of the most popular pay-to-earn games on the market. The game’s NFTs are called Axies, and their values vary all the time.

For example, in August 2021, players could purchase a “decent” Axie for approximately $5 to $10. Meanwhile, as the hype about blockchain games began, the prices went up quite a bit.

Just one month later, in September 2021, players needed to set aside approx. $200 for a “decent” Axie (CoinMonks).

When NFT values increase like that, it causes a lot of hype on the market. As a consequence, a lot of new players want to hop on the bandwagon.

However, as the hype for these games rises, so do the entry barriers. Therefore, the players who join these games only after becoming insanely popular are in for the riskier investments.

With the rise of blockchain gaming, game developers want their piece of the pie. Because of this, new pay-to-earn games are appearing as we speak.

However, for now, older titles still hold the throne. Nevertheless, some titles that appeared in 2021 have been climbing in popularity.

Here is a list of these games, as well as the year they were released and the platforms they operate on: 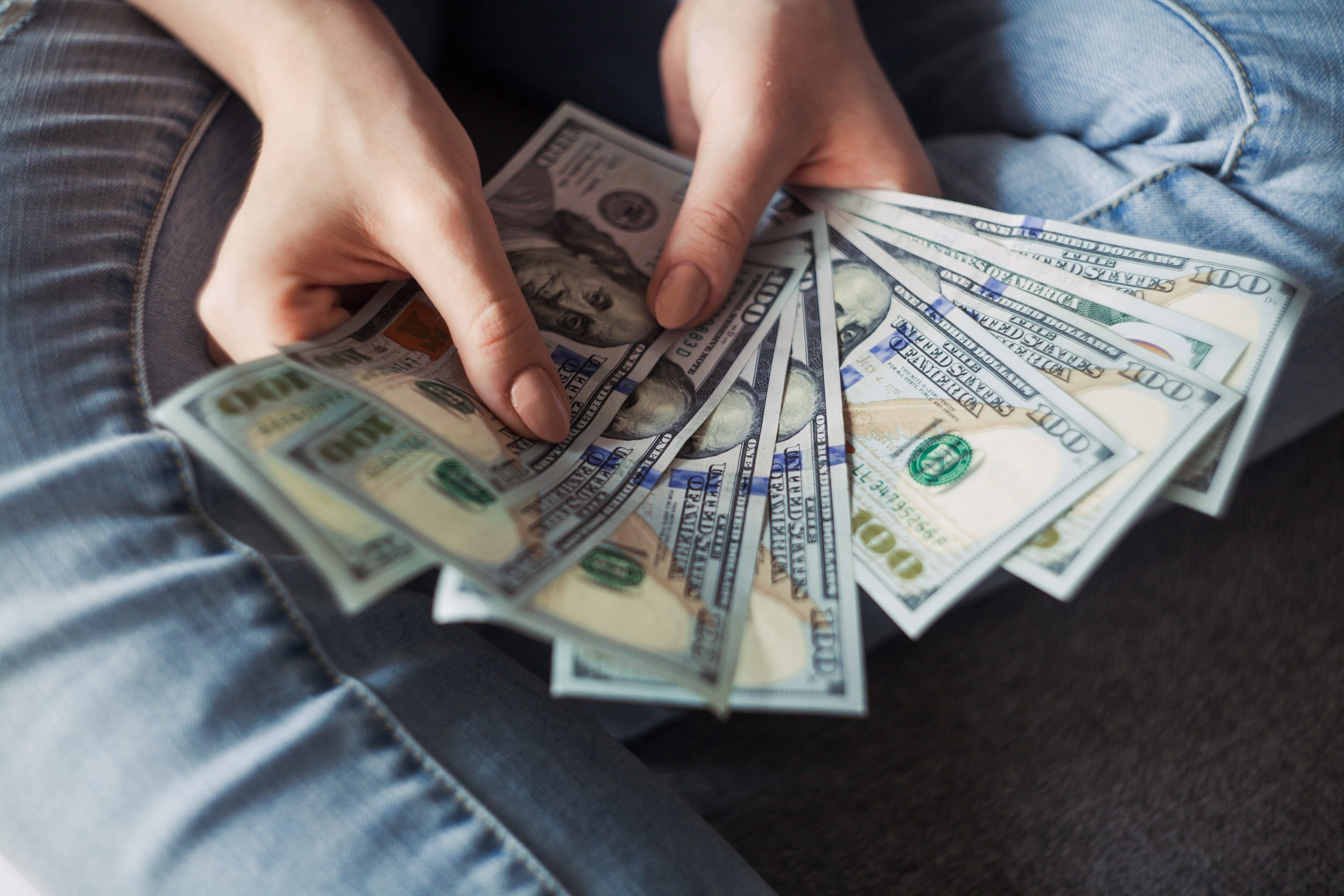 How Do Developers Make Money from Pay-to-Earn Games

They do get a small piece of the pie, though.

In pay-to-earn games, developers first need to determine what players need to own in order to start playing a game. They can make them buy one, two, or more NFTs. For instance, to play Axie Infinity, players need to own at least three NFTs beforehand.

Okay, if the developers don’t just take this money, how do they monetize?

The developers are the creators of every NFT in their games.

Think of them as music authors. Just like musicians make money through royalty payments, so do NFT creators.

Any time an NFT from their game gets sold on any marketplace, this gives them a reason to smile. With every trade that happens on the market, a certain share goes to the developer.

Developers determine this share by arranging smart contracts on the blockchain. The standard for NFT royalties is anywhere from 5% to 10% (Cyber Scrilla).

One of the biggest advantages of pay-to-earn games is their ability to draw players and keep them engaged.

What makes them so successful at this?

When players invest in pay-to-earn games, they start taking them very seriously.

These are not the games they play to relieve stress or kill time. Players who play such games perceive them as a viable financial investment they will profit from in the future.

In play-to-earn games, they are only investing their time. Sure, time is valuable. However, people don’t cherish it as much as they value their money.

All of this makes pay-to-earn players very loyal.

The pay-to-earn model itself is quite encouraging for making players stick around. It’s pretty simple – the more they play, the more they can expect to earn from the game.

For these games, retaining players is essential.

As long as they have enough players interested in trading, selling, and buying, these games stay alive.

However, if a game loses its players, the whole system will crash.

A Final Note on Pay-to-Earn Games

At the moment, blockchain gaming is on the rise, including pay-to-earn games. Thanks to this, there are a lot of players ready to invest in such games.

However, what does the future hold for pay-to-earn games? Are they going to become prominent on mobile? We’ll keep you posted.

Play-to-earn games? Cryptocurrencies? NFTs? Confused? Read our article to learn all the whats, whys, and hows of the new trend in gaming!

Play-to-earn games? Cryptocurrencies? NFTs? Confused? Read our article to learn all the whats, whys, and hows of the new trend in gaming!