If you’re looking for new play-to-earn games coming on the blockchain, you should check out Origin Heroes.

This blockchain game is one of the most exciting upcoming games that will appeal to both experienced players and casual gamers.

Here’s what you need to know about Origin Heroes!

What Is Origin Heroes?

Origin Heroes is a play-and-earn merge-based strategy game set in Etheria, a mysterious metaverse. It’s developed by Tastypill, a publisher of many popular hyper-casual games.

Interestingly, Origin Heroes is the first ever merge strategy game built on the blockchain. It’s a casual game that combines the simple merge mechanic such as that from Merge Dragons, EverMerge, or Merge Mansion with mid-core features such as character building or item upgrades, all wrapped up in an adventurous strategy game. It’s simple enough that anyone can start playing it, but it’s not that easy to master.

Elixir of Courage (EOC) is the game’s utility token and players can earn it by playing the game and making progress. It’s the foundation of Origin Heroes’ play-and-earn model.

Learn more about how this game works in the following sections.

Origin Heroes NFTs work as avatars in the game, and players can use them to enter battles, complete quests, build, explore Etheria, and socialize with other players. Furthermore, owning these NFTs gives players access to all play-and-earn functionalities of the game.

Each Hero NFT will have a unique set of attributes that ties into the backstory of Etheria. For example, class, race, kingdom affiliations, etc.

Owning NFTs from the First Heroes Collective has many future benefits, including exclusive access to future NFT drops, merchandise, a free claim on an Etherian metaland plot, and other perks.

The next generation of Origin Heroes NFTs won’t have all these benefits but will allow access to the game and its play-and-earn system. This is another reason why now is the time to secure your Origin Heroes NFTs, as the First Heroes Collective will always be the most valuable Origin Heroes collection. 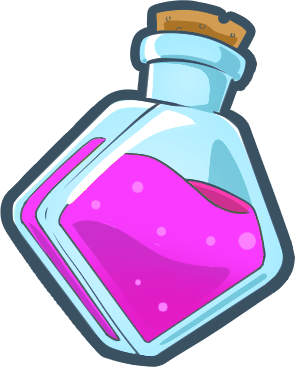 Another aspect of Origin Heroes and its play-and-earn mechanic is its premium token – Elixir of Courage or EOC. As I mentioned, players get this token as a reward for playing this strategy game.

Furthermore, the EOC token is required for minting new Heroes. Further down the line, the EOC token will have more use cases, including building, crafting, governance, and more. 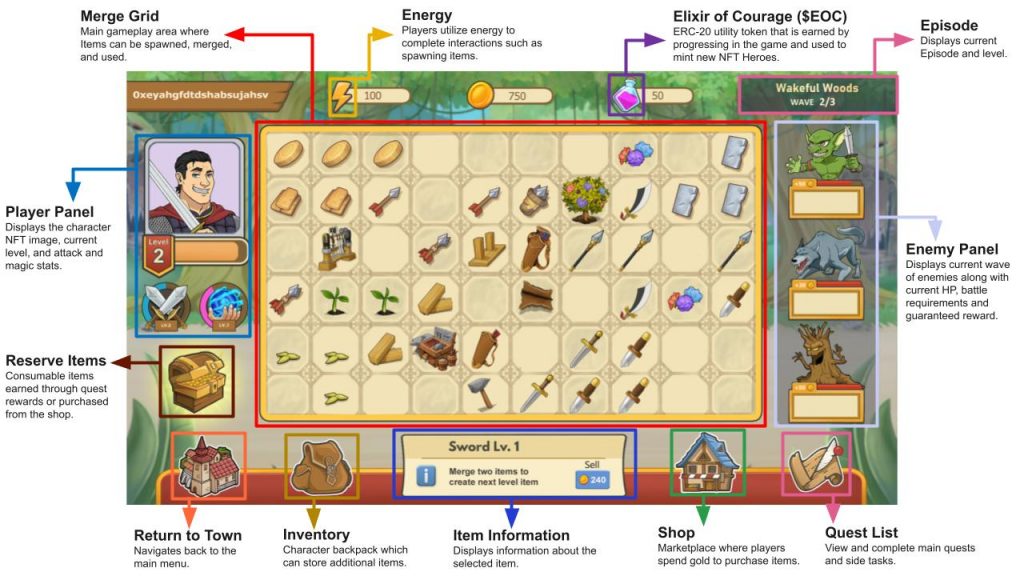 Even though this is a blockchain game, its gameplay is similar to other games in the merge genre. Essentially, you play on a grid that holds various items you acquire. You can create new items by merging two similar items. For example, merging two level 1 swords will result in a more powerful, higher level sword and so on.

There are two types of items – Source and Task items. The former spawn additional items onto the grid, while the latter is used for attacking enemies, completing quests, and upgrading your Hero. Furthermore, Source items are permanent, while Task items are consumable.

The strategy aspect of Origin Heroes lies in deciding on how and when to use these items to make maximum progress. More specifically, players must balance the use of items for battles, quests, and upgrades.

Battling and defeating enemies is important because they can drop valuable items and currencies like EOC. Furthermore, it allows progress.

Completing main and side quests is another important part of the gameplay because it also drives progress and you can get rewards like EOC, EXP, grid items, etc.

Finally, upgrading the stats of your Hero makes him more powerful against enemies. There are two main stats you can upgrade – Attack and Magic.

The Benefits of Origin Heroes

Here’s why you should consider playing this merge strategy game.

As I mentioned, this is a play-and-earn game and there are several earning possibilities in Origin Heroes.

Primarily, it’s about earning EOC tokens through gameplay. Players can swap these tokens for other currency or use them in-game, to mint new Heroes, for example.

Furthermore, Origin Heroes NFTs also have real-world value and besides using them as characters in the game, players can trade them on various NFT marketplaces.

In the future, players will be able to craft rare items and NFTs that can be traded on markets, participate in special events,earn rewards as well as the ability to own land. All these activities are both fun and profitable.

Become a Land Owner in the Metaverse

In the future, players will be able to own land in the Etherian metaverse. This is another huge benefit of playing this game and it will add an additional layer of fun.

There will be 20,000 Origin Land plots. The first 8,888 NFT holders will get free land parcels, which is an awesome perk. The rest will be available for purchase by the public.

As I mentioned, this will be a great earning opportunity, but it will also enrich the gameplay.

Contribute to the Project

If you’re among the early investors and purchase an NFT from the first Hero Collective, you get a say in how the story develops. In other words, you’ll be able to contribute creatively and become a part of the community, which can be rewarding in and of itself.

Above all else, Origin Heroes is a fun game to play – that was the main goal of its creators. It’s not just about earning or trading NFTs, but about enjoying the gameplay and going on a fun adventure.

Finally, here’s a glimpse of what the future of Origin Heroes will look like – it’s quite exciting!

As I mentioned, the launch of the First Heroes Collective is coming soon – October 2022. In Q4, the story lore and map will be unveiled.

The beginning of 2023 will be marked by an exclusive merch drop available only to NFT holders. Furthermore, land plots will be minted and closed testing will begin. In Q2 2023, the EOC token will be released along with generation 2 Heroes. Mobile alpha release is planned for the second half of 2023 and the 1.0 version is planned for 2024.

Read this article to merge all the valuable info about merge game monetization and find out how the top merge games earn the big bucks.

Merge Mansion monetization tactics are specific but clearly very profitable. Click to find out their secrets, strategies, and many more!

Read this article to merge all the valuable info about merge game monetization and find out how the top merge games earn the big bucks.

Merge Mansion monetization tactics are specific but clearly very profitable. Click to find out their secrets, strategies, and many more!