The mobile app industry is thriving, and current predictions estimate that trend will continue in years to come. That’s no surprise considering advertisers spend a lot of money to display their ads in apps. According to AppAnnie, global in-app advertising spend will reach $201 billion by 2021. That’s great news for developers who want to monetize their app and scale their app business.

If you ever looked into app monetization, you have probably come across ad mediation. People are raving on about it and listing different ad mediation benefits and advantages. The most appealing one being higher ad revenue. However, to many developers, ad mediation seems like a mysterious process that’s hard to master. Some are even wondering, “Do I really need ad mediation? Is it all it’s made out to be?”

The short answer is yes.

For the long one, keep on reading and find out everything you need to know about ad mediation benefits.

What is Ad Mediation and How Does It Work?

Ad mediation is one of the best ways to monetize your app and grow your business. It allows you to get more revenue from ads by working with multiple ad networks simultaneously. That’s why more and more app developers use ad mediation platforms.

Here’s how it works.

An ad mediation platform has the role of a mediator between the publisher (app developer) and ad networks. When it gets ad requests from your app, it passes it on to multiple ad networks. That makes them compete for the ad slot and the highest bidder wins. What’s interesting is that the whole process is automated and happens in milliseconds. 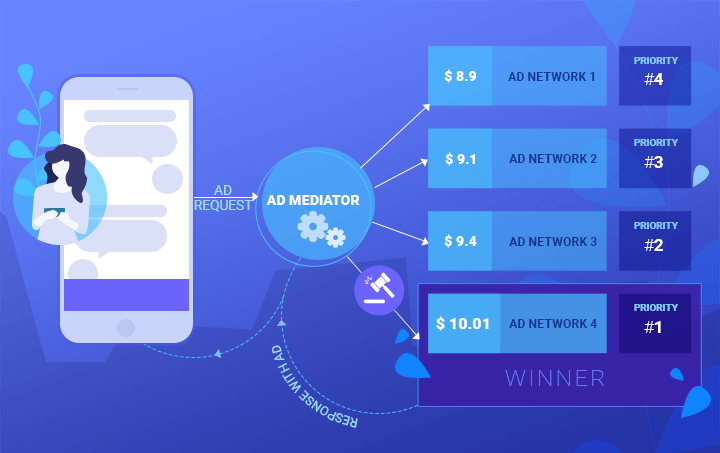 So why is ad mediation so important for app developers? In the next section, I explain the biggest ad mediation benefits.

Most publishers work with multiple ad networks. If you’re one of them, you know all too well it’s a nightmare to manage 10, 15, or more individual ad networks manually. Moreover, it’s near impossible to track the performance of each one. So not only are you wasting a lot of time and effort, but you’re also not maximizing your ad revenue.

That’s where ad mediation comes in. It allows you to access and control all your ad networks on one centralized platform. In addition, ad mediation platforms offer insight into important metrics as well as detailed reports. That makes the app monetization process so much easier and effective for developers. Plus, it frees up a lot of time to do other things.

Only One SDK Necessary

If you were to work with multiple ad networks without an ad mediation platform, you would need to integrate SDKs for each individual one. Not only that, but you would also need to take care of updates for each SDK. In short, it’s a huge pain in the ass.

However, if you collaborate with a mobile ad mediation platform, you need only one SDK. Plus, integration is usually very fast and simple. All of that is a huge advantage for app developers.

When it comes to making money off your app, you want to make sure you’re in control of it. Before ad mediation technology came about, selling and buying ad space was extremely disorganized and hard to keep track of. Furthermore, the prices were all over the place which was also far from ideal.

Now, with ad mediation, publishers can control how and to whom they sell their ad inventory. Even though the mediation process is usually automated, most platforms still allow you to customize the waterfall by manually giving priority to desired ad networks.

Hands down, one of the biggest ad mediation benefits is higher eCPM rates. That is achieved because an ad mediation platform connects you with multiple ad networks. And when more than one demand sources compete for your impressions, the rates go up.

The same cannot be achieved without ad mediation because there would be no competition between ad networks. Let’s say you, as a publisher, work with only one ad network. There would be no other option than to sell your ad inventory for the offered price. More often than not, that wouldn’t be the best deal. That’s why many app developers use ad mediation as a solution to that problem.

Fill rate is another important metric for app developers. It refers to the percentage of answered ad requests. In other words, fill rate tells you how much of your ad inventory is sold. The goal for publishers is to improve fill rate as much as possible.

However, you can’t have a high fill rate if you have access to only one ad network or a couple of them. Here’s the thing, you probably have more ad inventory than you can fill with just one ad network. And when a large percent of your ad inventory is not used up, you’re missing out on potential earnings.

On the other hand, with ad mediation, your fill rate improves which is a huge benefit. Depending on the ad mediation platform, you can get access to 10, or 20 ad networks. Sometimes even more. If one ad network can’t fulfill the ad request, mediation will move on to the next network until that ad slot is filled. That ensures the fill rate goes up and your inventory gets sold.

As eCPM rates get higher and fill rate improves, you’re able to maximize your earnings. So ultimately, ad mediation brings more ad revenue to the app developer. It is without a doubt its biggest benefit. What app developer doesn’t want that? Wouldn’t it be great to finally have a considerable monthly income coming from your app? That’s when all the hard work pays off.

When you consider all the ad mediation benefits, it’s hard to see why you wouldn’t try it. There’s little chance you could achieve the same results without ad mediation. What’s surprising is that only 40% of app developers use it. That’s a huge missed opportunity considering most developers are wondering how to monetize their app effectively.

I can hear you say, “But ad monetization platforms take a percentage of the earnings.” Yes, they do. Usually about 10%, depending on the platform. However, you can still increase your revenue significantly and there are many important ad mediation benefits you get. So it’s definitely worth it.

Has this article changed your mind about ad mediation? Do you have any questions about it? Tell us your thoughts in the comments below!

In-App Bidding: Get the Most Out of Your App Monetization Strategy

Wondering how to monetize your app quickly and effectively? You need to consider in-app bidding. Learn all about it in this article!

Want to monetize your app and get revenue from ads? You should consider working with ad mediation platforms. Find out which are the top ones!

Searching for ad mediation tips? Are you trying to generate more ad revenue? Then this text is for you. Implement our tips and watch your revenue explode.

Ad monetization is a great way of making money from your app. But how to decide what is the best app monetization platform to achieve this?

In-App Bidding: Get the Most Out of Your App Monetization Strategy

Wondering how to monetize your app quickly and effectively? You need to consider in-app bidding. Learn all about it in this article!

Want to monetize your app and get revenue from ads? You should consider working with ad mediation platforms. Find out which are the top ones!

Searching for ad mediation tips? Are you trying to generate more ad revenue? Then this text is for you. Implement our tips and watch your revenue explode.

Ad monetization is a great way of making money from your app. But how to decide what is the best app monetization platform to achieve this?