App Store Ratings: How to Get Good Ratings and Reviews for Your Mobile Game?

Do you know what’s one of the biggest deciding factors in the user’s decision to download a mobile game?

In this article, we go through: 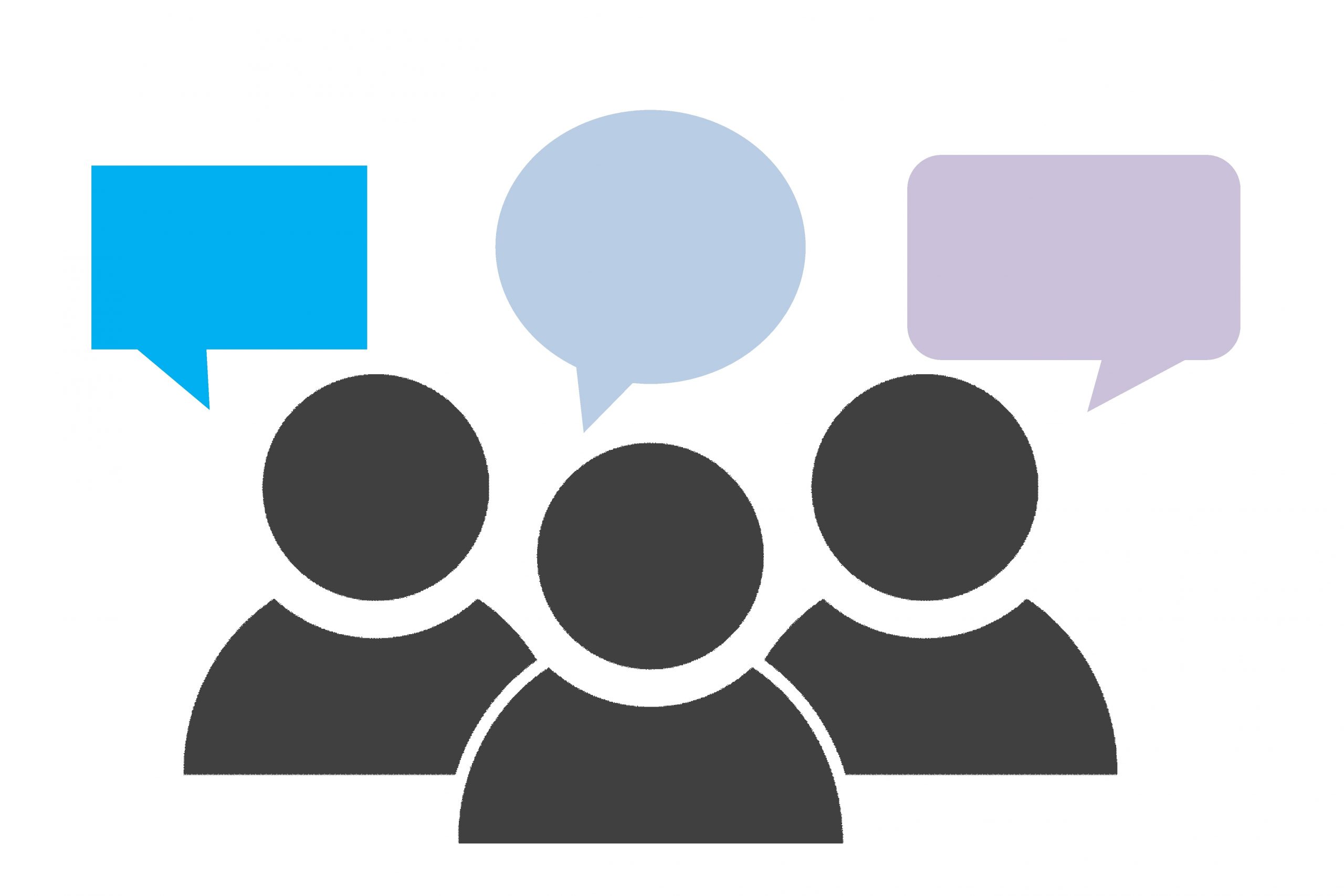 5 Key Reasons Why It’s Important to Have Good Ratings 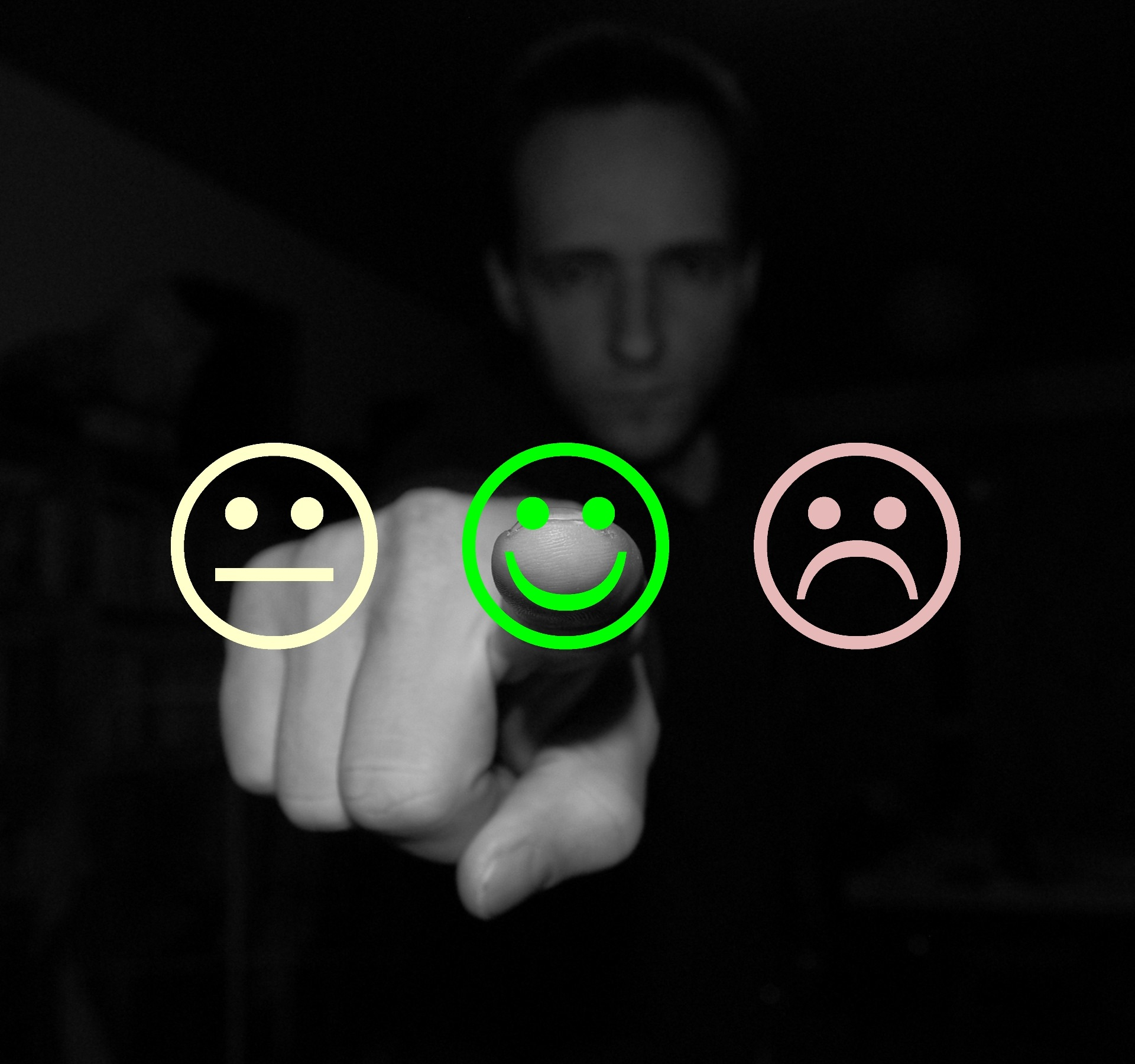 Let’s get to practical advice. Here are the best tips for getting good ratings and reviews for your mobile game.

This should go without saying, but you should start by making an awesome mobile game. Let’s be honest, if your game sucks, you can’t expect it’ll get awesome ratings and raving reviews.

So make sure you thoroughly test your mobile game during the soft launch. It will help you understand what works and what doesn’t.

2. Keep Updating Your Mobile Game and Fix Any Problems

Your work is not done, even after you’ve released your mobile game. The key is to constantly be on the watch for any problems that might come up and fixing them quickly.

As soon as users experience an issue with the game – whether it’s bugs or crashes – they will get frustrated. Many of them will leave a bad rating as a result.

In addition, it’s important that you update your mobile game regularly. Not only will that encourage users to give you good ratings, but it will also improve your App Store rankings. 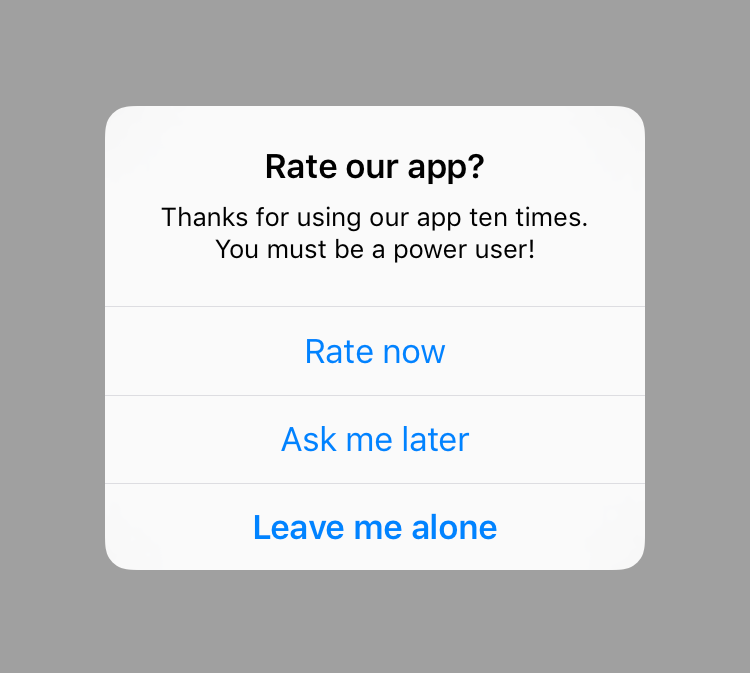 3. Encourage Users to Rate and Review Your Mobile Game

If you don’t encourage users to rate your mobile game, chances are they won’t do it. Usually, only a small percentage of users rate games. They fall into two categories – people who are very vocal about loving a game, and those who really hate it.

The majority of users enjoy playing your game. However, they’re not inclined to leave feedback. So the key is to encourage that group of people to rate and review your mobile game. It doesn’t mean you should be pushy, but a friendly reminder here and there is fine.

It’s also important to explain to users why App Store ratings are important. Not only does it benefit the game, but users as well. If they give feedback, the game will be more successful and in turn, the users get new updates, improvements, and extra content.

It’s a win-win situation for everybody. 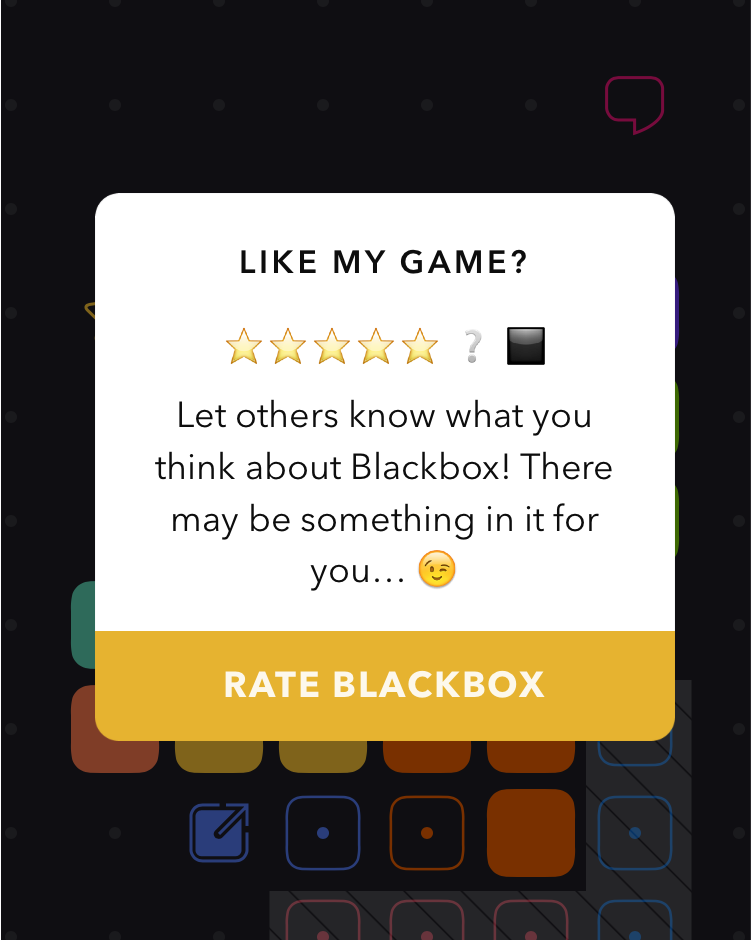 4. Ask for Ratings and Reviews Inside the Game

One of the most effective ways to get good App Store ratings is to ask for feedback inside the game.

The easiest way to do that is by adding an app review plugin. There’s one from Apple that’s quite good. It’s quick to set up, and it allows users to easily leave a review in the App Store.

However, it’s essential to know when to ask and how. With most plugins, you’ll have the option to prompt users after certain events or after specific conditions are met.

What you don’t want to do is ask for a review in the middle of gameplay or even worse – as soon as the user installs the game. It disrupts the user experience. That’s like someone asking you for a review as soon as you step into a restaurant, without even trying the food.

When you ask users to rate the game while they’re in the middle of gameplay, you’ll either get a bad rating or the users will simply leave the game, which is equally bad.

Another no-no is to prompt users to rate your game more than 3 times per year. Anything more than that is spammy, obtrusive, and against App Store ratings and reviews guidelines.

Instead, do it when the user feels the most satisfied with the game (i.e. after a finished level or an in-app purchase). That’s when players will have the highest opinion of your game.

Sometimes the users won’t be as happy with the game, and in this situation, you don’t want them to express their dissatisfaction in the form of reviews. The solution to this can be directing them to a dedicated in-app customer service section. You should introduce them to this option before asking for a rating. Solving the player’s problems away from the store might motivate them to leave a positive review in the app store after their problems get resolved.

It’s not only about when you ask for a review, but how you ask for it as well. Considering you can ask users for feedback only a couple of times a year, it’s crucial to do it in a way that will produce immediate results.

In order to eliminate any guesswork, the smartest thing to do is A/B test the call to action. Simply try a couple of different prompt versions and see which one the users respond to the most.

There are many different prompts you can try and it’s not important only how you ask, but how the prompt is designed and how easy it is for players to leave a rating. Some of the common texts are “Do you enjoy *game name*? Please leave a rating!”, “Do you want to rate this game?”, “If you like this game, please leave a five-star review!”. There are many others you can try, some are more formal, while others are casual. Test everything and see what works best for your user base. 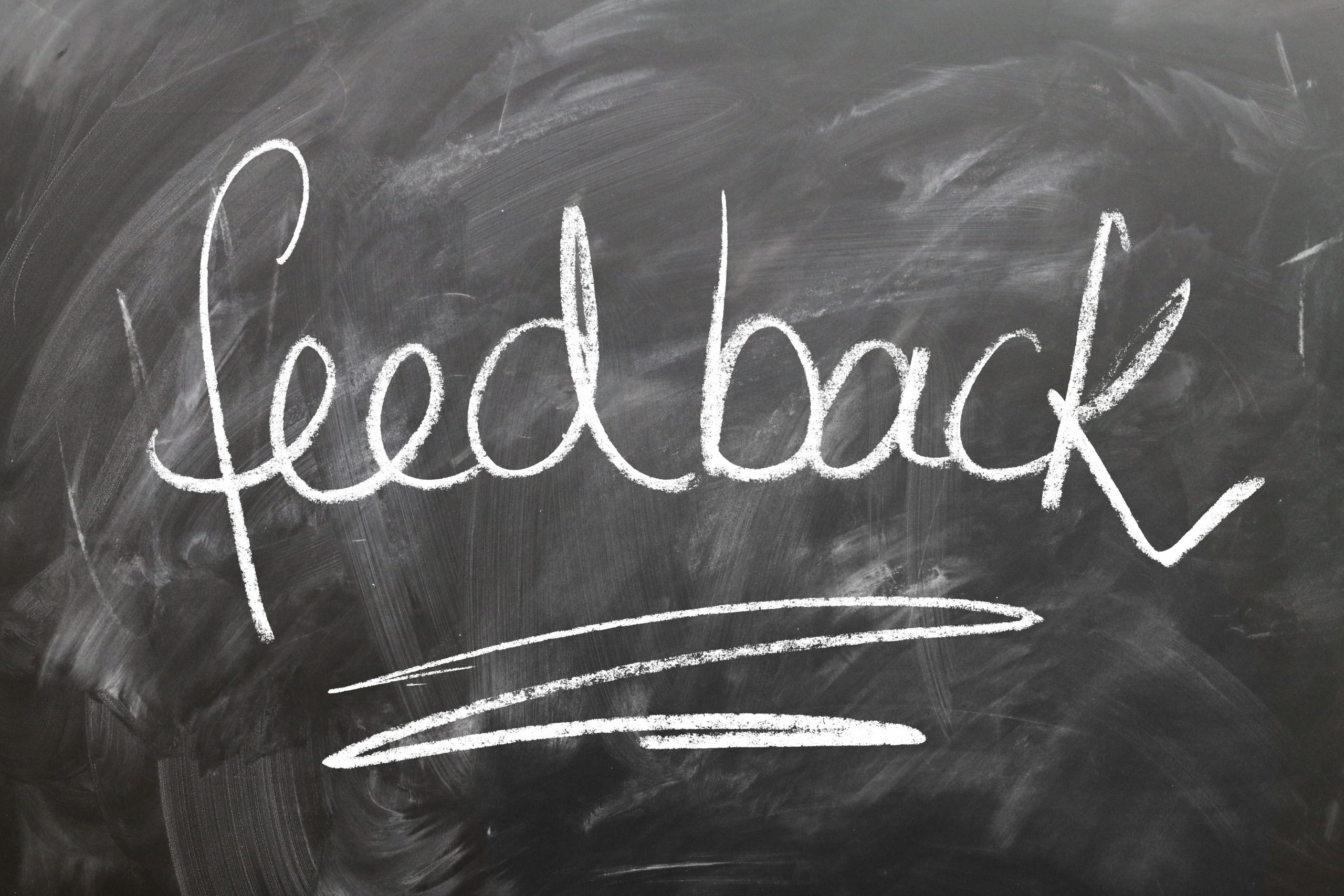 Your game is not the only channel for asking for feedback – it can be done on social media as well.

If your game has a decent social media following (which it should, btw), you can leverage it to get more reviews. That’s why it’s crucial to build a community around your mobile game. You should start cultivating it even before you launch your mobile game.

As it was mentioned before, don’t harass people on social media to leave a review. That creates the opposite effect.

Another strategy to get more App Store ratings is incentivizing users with rewards. It refers to rewarding your users for leaving feedback whether it’s giving them extra lives, currency, or other in-app content.

However, it’s important to note that you need to be careful when using this type of strategy. Before you set it up, make sure it is in line with all App Store rating rules. 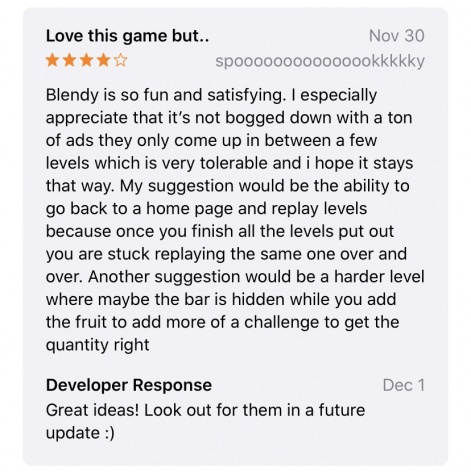 8. Always Respond to App Store Reviews, Especially the Negative Ones

Here’s the thing, when you respond to App Store reviews, the overall ratings tend to improve. Particularly when you answer negative reviews.

If a user expresses an issue in the review, do your best to solve it and comment on the review. In fact, you should answer all the negative reviews. Mobile gamers are very likely to leave better ratings if you hear them out and answer their review.

Everyone wants to get attention and feel like their opinion is being validated.

When responding to reviews, focus on the issue and tell the user how you are planning to fix it. You can also provide them with additional customer support resources.

Granted, as you start getting a lot of reviews, it might get increasingly time-consuming to answer all of them. However, it’s worth the effort because it can significantly improve your App Store ratings.

My final advice is to keep track of your App Store ratings. There are different tools that allow you to manage and analyze all the ratings and reviews you get. Some of them are Apptentive, AppRadar, Appsfire, Appboy, UserVoice, etc.

Besides tracking your mobile game’s rating, these tools also make answering reviews much simpler. Also, most of these tools enable you to set up prompts inside your game.

Some methods apps use for improving their rating are not as ethical as others. While it’s acceptable to promise new content and updates for a review, any kind of monetary exchange for positive-only reviews is not.

The most common not-so-ethical methods we’ve stumbled upon across the app stores are:

Keep in mind that both Apple and Google will recognize and value authenticity as an indicator of quality. Not only that, but the users will also likely recognize “bought reviews”, especially if the app is not as good as its ratings.

11. Be Honest about Your Game

In order to have a positive rating, you need to make sure that you can provide everything that you promised to the players. The worst kind of a disappointment for players derives from false promises.

This means that even if your game is good, but the app store listing or ads are misleading, players will be disappointed. Unfortunately, this eventually leads to negative comments and users warning each other not to download your game. The description, titles, categories, and visuals are essentially you guaranteeing to the players: Yes, this game looks/sounds/works just like this!

Moreover, you always want to attract the right users and lead them to your game. If your description and visuals don’t match the game’s content, they just won’t be able to find it.

However, it’s very easy to fall into the trap of clickbait and false representations, since that can bring some instant profit.

And remember: it is better to get a negative review about your game’s content and performance than people being disappointed about you tricking them into downloading something they didn’t want. You can always fix the game, but it is much harder to fix your users’ trust.

Now we want to hear from you!

What techniques did you try to get better App Store ratings? Do you need any help?

Also, don’t forget to subscribe to our newsletter and get the latest news regarding mobile game marketing!

How to Create a Good App Promo Video for Mobile Games?

Not sure how to create the perfect app promo video for a mobile game? Click here and let me explain everything you need to know!

How to Create a Good App Promo Video for Mobile Games?

Not sure how to create the perfect app promo video for a mobile game? Click here and let me explain everything you need to know!